Warning: The magic method SFML_Singleton::__wakeup() must have public visibility in /homepages/34/d651361989/htdocs/clickandbuilds/brightoncoffeeguide/wp-content/plugins/sf-move-login/inc/classes/class-sfml-singleton.php on line 72
 Megan Stimpson, The Marwood - The Independent Brighton & Hove Coffee Guide 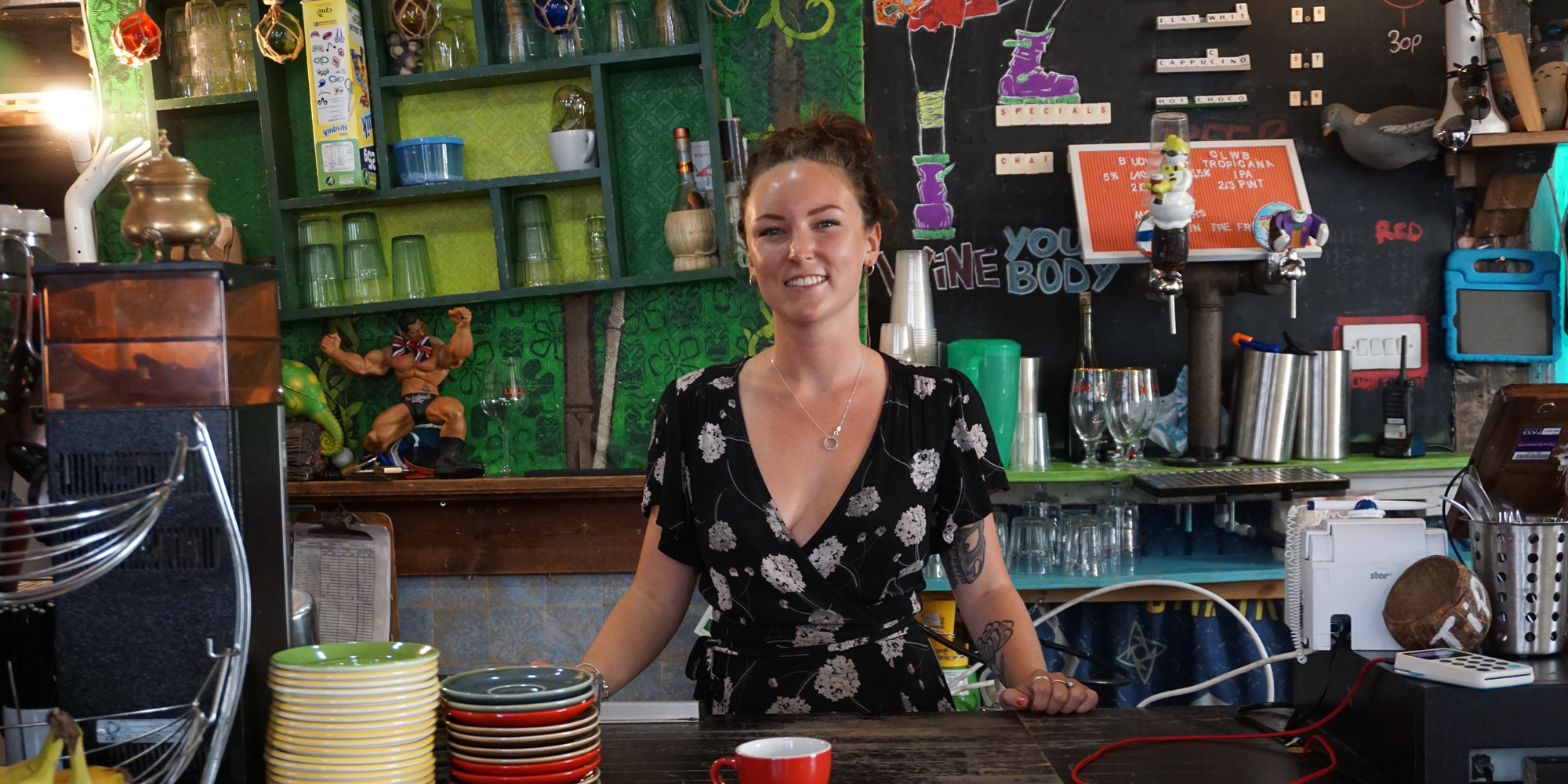 From Brighton to Brisbane and back again, Megan Stimpson has been all across the globe in pursuit of great coffee. In each city she has grown and developed her repertoire as a barista, expanding her knowledge and understanding of speciality coffee scenes.

Head Barista at The Marwood Bar and Coffeehouse in Brighton for almost three years, she’s now using the skills she’s developed over her career to ensure the coffee offering is of a high level. She manages to do this amongst an extremely eclectic and dynamic DNA that pulses through the heart of The Marwood.

We sat down with the karate black belt to chat about her trip from the Sunshine Coast all the way to Brighton beach and what the future holds from here.

Hi Megan. Can you tell us about your background personally?

Hi!  I am a 21-year-old barista who works at The Marwood Bar and Coffeehouse. I was born in Brighton but moved to the Sunshine Coast, Australia when I was five where I spent 13 years. In those years I didn’t do much but one of my biggest accomplishments is getting my black belt in karate after almost ten years of training.

What was your first job in coffee and what path have you taken to arrive at Marwood?

My first job in coffee was when I was 16/17, in a cafe called San Churro. Which was mainly chocolate, churros and chocolate-based coffee drinks. From there I moved to Brisbane city where I found myself working in a fast-paced artisan cafe. Here I learnt a lot about cold drip coffee, espresso and single origins.

And that is when I moved to England. Aged 18. I found myself working In Cafe Coho for my first year in England and from there I was poached by the cafe next door. Being Marwoods. I had a lovely conversation with the owner Richard Grills where he said I sounded foreign and miserable. And now I have worked  there for over two years.

What is your current role at Marwood and what are your responsibilities?

I have been working at Marwoods for almost two and a half years and for the last year and a half my role has been head barista. My responsibilities include training new staff on coffee i.e. dailing  in espresso, filter, latte art. Taking pride in everything we do as a team. Keeping the vibes loud and happy (because if I am in a bad mood everyone is in a bad mood) and naturally making LOADS of coffee.

What is your ethos when it comes to making and serving coffee?

When it comes to making and serving coffee I like to do it to the best of my ability. I’d never serve anything that I wouldn’t drink. If this means pulling 100 shots and changing the grind 1,000 times, then that is exactly what I will do until I am happy with the end result.

I also like to think what makes a good cup of coffee is the interaction between customer and barista from till to cup. At Marwoods we have a large number of regular customers. All of which I have a level of friendship with. I have met most of my best friends through making their coffee over the years in England and Australia.

As a coffee shop, Marwood appears to offer a feeling of freedom and creativity and, as a barista, does this translate into your work?

Definitely. Marwoods is a free and creative place. We are like a family of crazy people and we like everyone else who enters to feel as comfortable as we do. Organised chaos I like to call it.  It’s fun and how I like to work as long as the job is getting done. Who says you can’t dance and sing while you’re making coffee, hmm?

What do you enjoy most about the Brighton coffee scene?

Okay, I’m going to put all coffee aside for just a second and tell you that the part I enjoy most about the coffee scene in Brighton, is that everyone seems to know everyone in a way. It’s a little community. Everyone is willing to help each other out. There’s no ‘my coffee is better than yours’ or ‘oh you shouldn’t go to that cafe’ it’s friendly and welcoming! And great fun to be a part of. Everyone just loves coffee so much here! Which makes me so happy.

Where do you see Brighton coffee heading and what would you change about it?

When I first moved back to Brighton I heard that it was the new up-and-coming Melbourne of the coffee world. And that is definitely where I see it heading; being associated with coffee of that level. People are experimenting more with different brewing techniques. They’re becoming more involved with what there is to offer. Even in the three and a half years that I have been here there has been a noticeable change in Brighton coffee.

I’ve never really thought about what I could change. But I guess one issue that everyone has is the amount of disposables used in cafes. Takeaway cups. Things like that. Let’s all get on the Keep Cup guys!  The last few weeks at Marwoods we have actually been trying out getting our milk delivered in glass bottles. To cut down on plastic waste.

What is it about Marwood that makes it so different to other shops?

Marwoods is a home. It’s a safe place for everyone. What I enjoy most in a working day is the company. From colleagues to customers. Dogs to turtles (that someone brought in once). It’s all just good fun, good booze and great coffee at the end of the day!

What’s your passion aside from coffee?

My passion aside from coffee is martial arts and red wine. Gotta love a glass of dark rich red wine to wind down after a long hard day of having a great time making coffee. And karate as mentioned before is something I had done for many years. Getting my black belt is something no one can ever take away from me.

What’s the most surprising comment you’ve received from a customer?

Haha, well it wasn’t a surprising comment as such but I was very surprised when I made a coffee for Mark Williams (Ronald Weasly’s dad in Harry Potter) and he said my coffee was amazing!

Do you have any advice for baristas just starting out?

You will never stop learning about coffee. There is so much to take in and it will just keep coming at you. Take it and enjoy it!

What does the future hold for yourself?

The future holds for me a place I can call my own. Not too big, not too small. And that is as far as I have gotten with my future planning. But first I have a lot more of the world to see and a lot more experience to gain.

Where can people find you?

You can find me down a little alleyway at The Marwood Bar and Coffeehouse. 52 Ship Street. The South Lanes.